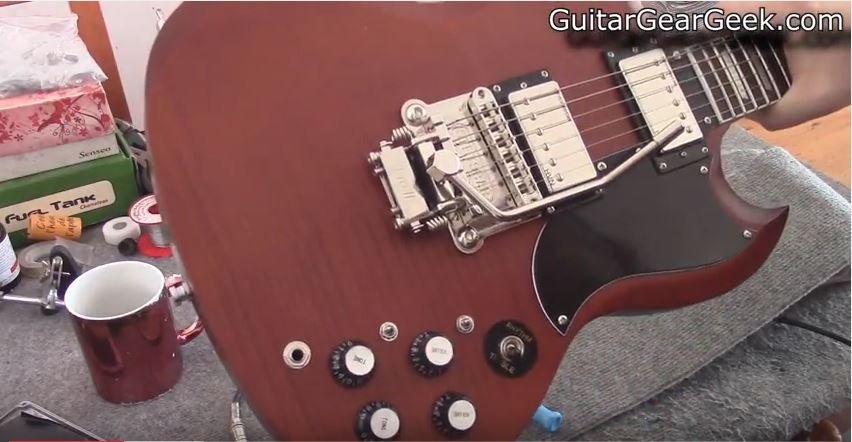 This article is the fourth one of the series “how to build your guitar kit”.

A stetsbar tremolo is one of the two systems available for a tune-o-matic guitar type. The other one being a Bigsby. The Stetsbar is simple to install. It needs no modification and delivers more advanced performance than a Bigsby.

Bigsby tremolo is a thing of the past. Some people are hooked on vintage gears due to nostalgia or fame. Because that gear was used by superstars, and became a myth over time. Most of the vintage parts are just old, ineffective, unprecise and noisy. They are nowhere near today’s gears. Hendrix and alike would have been baffled by today’s instruments. They would have thrown out of the window their vintage material to grab the ones of today in a blink of an eye.

A stetsbar tremolo is simple to install. You only have to remove the tune-o-matic bridge and place the Stetsbar block on the four washers. You only have to screw the two bolts where the stop bar was. That’s all.

When you build a guitar, it takes few days to be stable after being stringed for the first time. The day I installed the strings I only tuned it and played it a little. It’s useless to set the neck and the bridge the first day. You’ll have to start again the day after.

After a day or two, I worked on the nut, set the tremolo and play the guitar some more. But I didn’t adjust the intonation yet because I wanted the guitar to be stable. Intonation setting is the last job you do when you are setting up a guitar.

Before setting the string’s height, I had to lower the nut. This is a straightforward task, but it requires to be done carefully. If you file too deep, the nut is going to be dead. You might have to change it. It is better to be slow and to do it well. Also, you must use a thin file. Otherwise, you are going to enlarge the string’s slot, and it will cause an issue when you play. Especially for the treble strings.

The second step is to set string’s height like you would do on a regular tune-o-matic bridge. Every time you adjust the height, you have to tune the guitar again. The string tension is the most important aspect of your setting. Setting the guitar with strings tuned too high or too low will change the setting completely.

You must play each string from the first to the last fret to find frets that are buzzing. You can lower the bridge until the guitar starts buzzing. 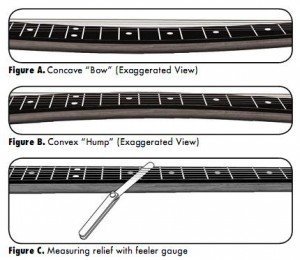 How to fix frets buzzing

A luthier file is an excellent tool, but using such a device shouldn’t happen on a new guitar. Before starting a severe fret job, you must adjust the truss rod or the bridge better.

If all strings are buzzing, you might have to do a fret job. But once again it’s almost impossible to have such task to do on a brand new guitar. It means that the bridge was set to low or that you were wrong gluing the neck. 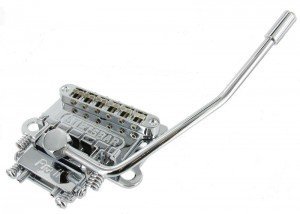 How to set the stetsbar in floating position

After the tremolo was set, I waited another day and played the guitar a lot to fine tune string’s height and neck. Also, I slacked the strings until they stopped going out of tune. 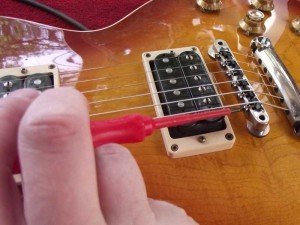 To do that, you have to use an electronic tuner and check the tuning at the twelves fret. If the octave is too high compared to the opened string, you have to unscrew the saddle. If it’s too low, you have to do the opposite, to reduce the distance between the twelve fret and the saddle.

I lowered the bridge pickup to have better access to the screws. Keep in mind that when you set the pickup close to the string, it changes the tuning. When the pickup is close, it lowers the tuning.

I had some issue setting up the tuning because the kit wasn’t well prepared. When you buy a guitar kit, a number must be penciled on the neck and in the neck slot. It is to prove that both pieces have been made to fit together. It was not mentioned on mine, and the heel of the neck wasn’t entirely straight. Even if I measured the scale when I glued it, it was not precise enough. I thought I’d have enough adjustment course with the slots, but I was wrong. Two strings couldn’t be set perfectly. Even with the saddles set to the lowest position, they were still a bit sharp. as Demonstrated in the video. Since I published the clip, I reversed the saddles to gain more room. It will be addressed in the coming video.

Recommended link to order the Stetsbar

Posted in Build your Own Guitar | Tagged Stetsbar Tremolo