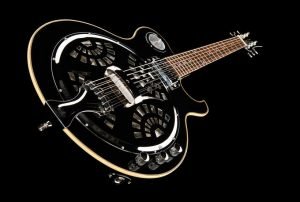 Harley Benton Custom Line ResoKing. I bought this guitar at Thomann website for the low price of 198€, shipping included.

The guitar in its original version was ok. The action is set low, and the neck plays fast. But the electronic was really poor.

The original mini humbucker didn’t sound too good, and it was a two wires pup that I had to modify into a four wires pickup to split coil it.

I already had Belcat mini humbuckers I already changed into 4 wires, so I switched pickups for the best. Belcat is an excellent brand even if yo can get them incredibly cheap compared to superstars established brands like Seymour Duncan or DiMarzio.

I installed a series/parallel switch on the neck volume pot. Every time I work on a humbucker I install a three position toggle switch to have series/split/parallel. When I lack room to had an extra switch, and I have to use a push-pull I always go for series/parallel instead of series/split.

I never understood why people are so crazy about splitting a humbucker. It doesn’t sound good. You get a huge drop in volume, and it gets so noisy that you can only use them with clean sound. There’s not a humbucker pup out there that sound as good as an ordinary single coil.

If I use three positions, series/split/parallel switch on other guitars is to blend them with other pickups. Selecting two split humbuckers make them noise free because two coils are selected.

Also, I already tested that belcat in split mode, and it sounds really bad. A mini-humbucker already has a sound close to a single coil. Therefore it sounds extremely thin and weak in split mode.

Advantage of parallel versus split

The advantage of parallel over split is huge. It sounds close to a single coil, but without a huge drop in volume and it doesn’t get as thin.
It is also as quiet as a humbucker in series since both coils are functioning.

Originally the piezo has no preamp, so it sounds really weak. The difference of volume with the neck’ magnetic pickup is so huge that you can’t use the piezo alone. Also, the tone of it is terrible. 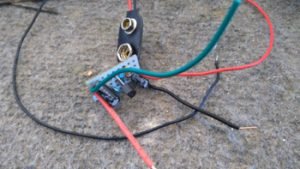 I made a Tillman JFET preamp ( see diagram) to enhance the pizeo and the result is astonishing. Now the pizeo carries the same output as the magnetic pickup. It is even a bit louder.

Making a Tillman JFET preamp is incredibly easy and cheap. The only problem with electronic components is that you can’t buy them one at a time. So you’ll have to buy hundreds of each value only to use one. But the cost of a 1000 pack capacitor is few dollars only, so it doesn’t matter. The JFET is a little more pricey, but you can buy the 10 at a time for a low amount of money. (See selected links at the footer of this article)

I wired the Tillman JFET preamp on the piezo only, and it is always on. The sound of the piezo without the preamp is so bad that I don’t see a use for it.

I added a Bill Lawrence EQ filter instead of a regular tone pot. In the down position, I have a regular 0.047uF cap functioning as a conventional tone pot. When pulled, a 1.5 Henri inductor kicks in coupled to a 0.027uF capacitor. It’s like having a varitone on a dimmer.
But the Inductor acts differently. It filters out the mid. I get a really bright sound when I roll down the tone pot to zero in inductor mode.

it’s also something easy and affordable to craft. A 1.5-henry inductor is a little hard to find, but any inductor will work.

Selected link to make your own advanced resonator

We use cookies to ensure that we give you the best experience on our website. If you continue to use this site we will assume that you are happy with it.OkPrivacy policy