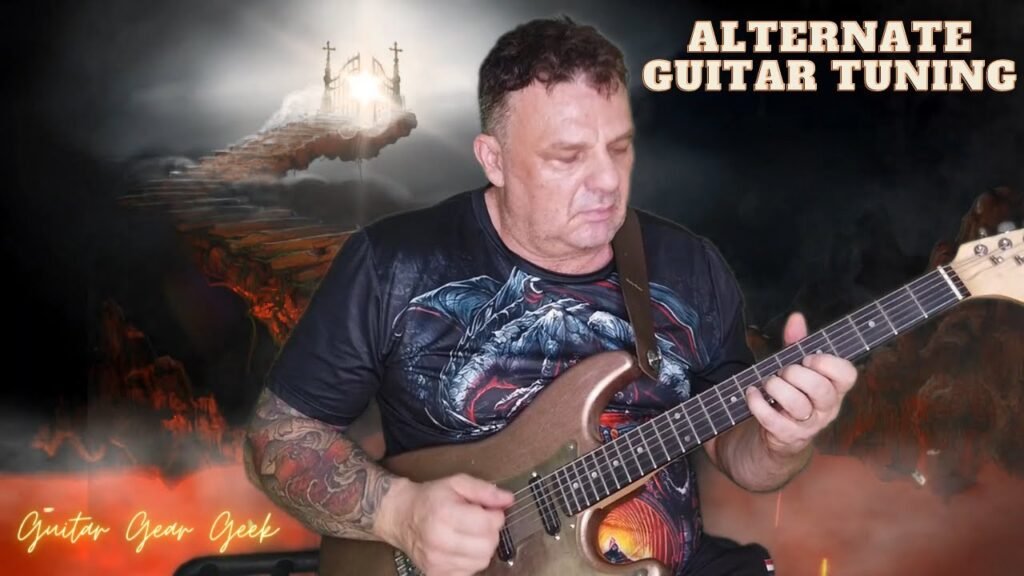 In this video featured in this article, I’m demoing my alternate tuning in open fifth.

I have built this guitar using the first-price kit from Thomann. Nothing crazy in the electronic for this one. Just a neck pickup volume. I think it’s a better alternative to the seven-way Strat wiring, also named the Gilmour switch.

I had the idea of this strange tuning when I turned to mandolin playing. Playing in fifth pleased me right away. The open string mandolin reminded me of the violin instantly. I also find out that tuning in fifth forces you to play more arpeggios. Traditional guitar tuning is more scale-oriented, and playing arpeggios is tougher.

Phrasing using arpeggios is a lot more melodic because the distance between each note is more significant. As a result, it’s easier to memorize the theme, and it is much stronger melodically. People under the shower are not singing the chromatic scale but regular tunes, which are always based on arpeggios.

This low tuning is Taylor-made for metal music. But instead of having a low C or B, I have a low F. A semitone higher the lowest note of a regular four strings bass guitar.

At first, you can play it like a mandolin if you use the first four strings; you have the basic first three chords everybody learns when you start mandolin playing: G, C, D. Suppose you play the four strings in the middle, from the C string up to the A string. It’s like playing a mandola or a mandocello. Then the same position renders C, F, G. And if you repeat the same process on the four lower strings, you have F, Bb, C.

It’s nice to start from there and to play by ear in those keys.

On the other side, playing like a regular guitar is extremely difficult, if not impossible. For example, just playing a major scale or the chromatic scale is tricky. It’s much more challenging than a mandolin because the neck is a lot longer. Intervals are huge. You have to adapt to this new instrument and play music composed for it.

Finding your notes is relatively easy. Except for the two bass strings, all the other strings are in the traditional tuning. Only the order is different. Instead of having: G, D, A, E, you have A, D, G, and E. So to find your notes on those strings is easy. It’s like a guitar. And for the other two strings, the F and C strings. They are both a semitone up than the E and B strings.

The only problem I have is the low F. When I change strings; I’ll go for a bigger gauge. But, right now, if I hit the low F string a little bit too hard, it is out of tune.

Other than that, I love it.

The problem with the Alternate Tuning in Open Fifth is that there is no ready-made guitar string set. YOu have to make it buying out individual strings. Therefore, the end price is a little higher than a standard string set.
The good side is, strings are so big that you only have to change strings once or twice a year.